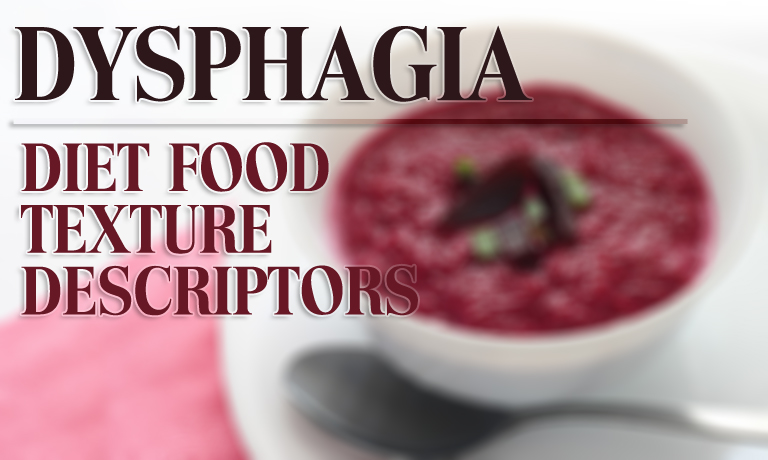 These descriptors detail the types and textures of foods needed by individuals who have oro-pharyngeal dysphagia (swallowing difficulties) and who are at risk of choking or aspiration (food or liquid going into their airway). The descriptors provide standard terminology to be used by all health professionals and food providers when communicating about an individual’s requirements for a texture modified diet. The food textures are:

Who developed the Descriptors?

The descriptors were developed by the National Patient Safety Agency (NpSA) Dysphagia Expert Reference Group in association with Cardiff and Vale University Health’Board. This group included representatives from nursing, speech and language therapy, dietetics, hospital catering and industry. These descriptors replace previous versions that were developed by the British Dietetic Association (BDA) and Royal College of Speech and Language Therapists (RCSLT). These new 2011 descriptors have been endorsed by the BDA, RCSLI Hospital Caterers Association (HCA) and the National
Nurses Nutrition Group (NNNG). Consultation has taken place with representatives from a wide range of manufacturers of dysphagia products throughout the development process.

Why were the descriptors developed?

The descriptors were developed in response to concerns relating to patient safety and a request from industry and in-house caterers for detailed guidance on categories of texture.

What is the rationale for the Descriptors?

original descriptors. The scientific evidence in this field is limited. These descriptors are therefore based on the best available current evidence, on texture descriptors produced internationally, and a consensus of expert opinion. As new evidence emerges these descriptors will need to be amended.