Substance Use Disorders in People with Physical and Sensory Disabilities – Introduction 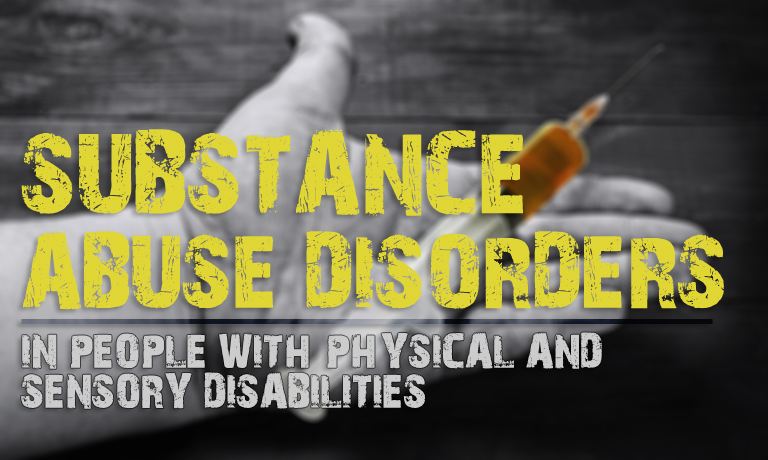 Approximately 23 million people in the United States, including people with disabilities, need treatment for substance use disorders (SUDs), a major behavioral health disorder. In addition, more than 24 million adults in the United States experienced serious psychological distress in 2006. People with and without disabilities may face many of the same barriers to substance abuse treatment, such as lacking insurance or sufficient funds for treatment services, or feeling they do not need treatment. In addition, people with disabilities may face other barriers to SUD treatment, particularly finding treatment facilities that are fully accessible. Vocational rehabilitation (VR) counselors, vocational education providers, and others who work with people with disabilities report that their clients with SUDs have less successful vocational outcomes than clients without SUDs. To improve outcomes, it is important that clients with disabilities and SUDs receive services for both conditions and that the disabilities do not prevent clients from receiving treatment for SUDs. This In Brief is intended to help people who work with people
with physical and sensory disabilities—hearing loss, deafness, blindness, and low vision—to better understand SUDs and assist their clients in finding accessible SUD treatment services.

What is an SUD?

It is difficult to estimate the number of people with physical disabilities who have SUDs. Some studies suggest that people with disabilities have higher rates of legal and illegal substance use than the general population, whereas other studies show lower rates. Although debate exists among researchers about the prevalence of SUDs among people with disabilities, there is agreement that active SUDs can seriouslyharm the health and quality of life of individuals with disabilities. An active SUD can:
■ Interfere with successful engagement in rehabilitation services.
■ Interact with prescribed medications; alcohol, for example, can interfere with antiseizure medications.
■ Impede coordination and muscle control.
■ Impair cognition.
■ Reduce the ability to follow self-care regimens.
■ Contribute to social isolation, poor communication, and domestic strife.
■ Contribute to poor health, secondary disabling conditions, or the hastening of disabling diseases (e.g., cirrhosis, depression, bladder infections).
■ Inhibit educational advancement.
■ Lead to job loss, underemployment, and housing instability.